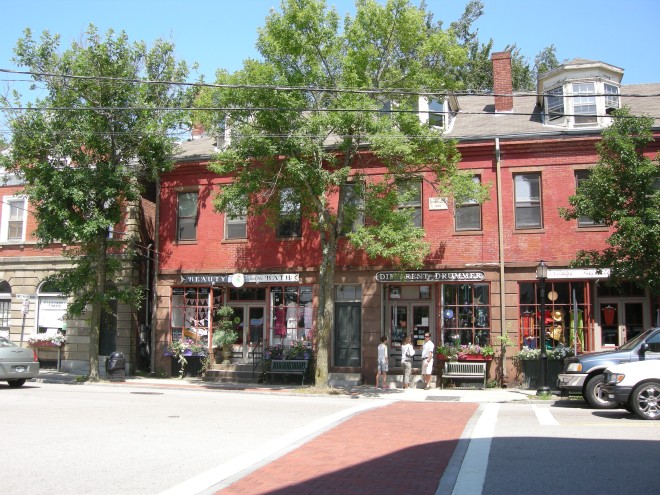 Rhode Island may be the tiniest state, but it offers some of the grandest treasures.  Not the least of which are its charming seaside villages.  While Newport gains most of the attention for its yachting history and marble mansions, there are many other towns chock full of history to be discovered as well.  Wickford is one of them.  Architecturally, nothing has changed there for over a hundred years.  There are no too-tall buildings, instead they’re simple, charming and on a human scale.  You can window shop your way down Brown Street, buy hand made jewelry, a t-shirt or antiques, and then take a stroll down residential Main.  Here time will slow to a snail’s pace.  You can feel it as you pass within inches of old doorways that have witnessed centuries of change, but haven’t succumbed to it.  It is so quiet on the residential side that you can’t help but wonder if anyone lives there, or if even the same old names might still reside in their original homes – names like Updike, Williams and Smith.

Roger Williams, founder of this Rhode Island colony, was banished from Plymouth in the 1630’s for clashing with their religious ideas.  So he headed west, befriended the Narragansetts along this bay, and set up a trading post with another settler, Richard Smith, in an area a mile north of Wickford, called Cocumscussoc.  He later sold his trading post to Smith, whose landholdings here would expand to a staggering size – nine miles long by three miles wide.   Now, greatly diminished in size but not in historical importance, you can visit this old trading post.  Well, the “newer” version of it, which was rebuilt in 1678 by Smith’s son, after the old one was burned by Indians.  It is now a larger and more elegant house, known as “Smith’s Castle.”  The museum is run by the Cocumscussoc Association.  There is a particular marked grave on the grounds, noting where soldiers fell during the King Philip’s War.  Forty men are buried in that grave.

In the center of Wickford, is a “new” church, St. Paul’s, built in the 1800’s.  It is called the “new” church because it replaced the “old” one, just a hidden walkway away.  The Old Narragansett Church was built in 1707.  It was established by the “Society for the Propagation of the Gospel in Foreign Parts” in 1706.  The minister told me that it is the oldest continuously operating church this side of the Mississippi.  Worship services are still held in the summer months.  Gilbert Stuart – our most famous colonial portrait painter, noted for portraits of Washington, including the one on our dollar bill – was baptized here.  On the first Sunday in August every year there is a service called Queen Anne Sunday, where a 1710 Communion service gifted by Queen Anne, and a prayer book of the time, is used.  Familiar names adorn the stones around the grounds.  Many Updikes, heirs to Smith’s Castle, are buried here. 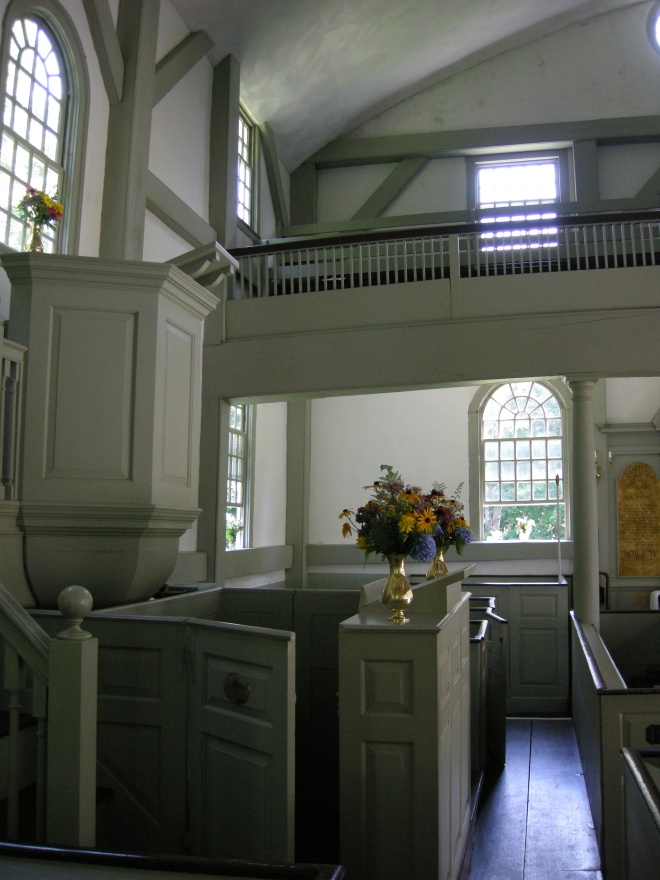 Pulpit of the Old Narragansett Church, 1707

Here are some scenes to give you a sense of Wickford’s old world ambiance.  The merchants and residents love of their village is obvious in the well kept facades and lovely landscaped grounds.  Sit, relax on a bench with your morning coffee, or afternoon ice cream, enjoy the sea breezes and song of the gulls, and pretend for a day that you are part of an earlier, simpler time. 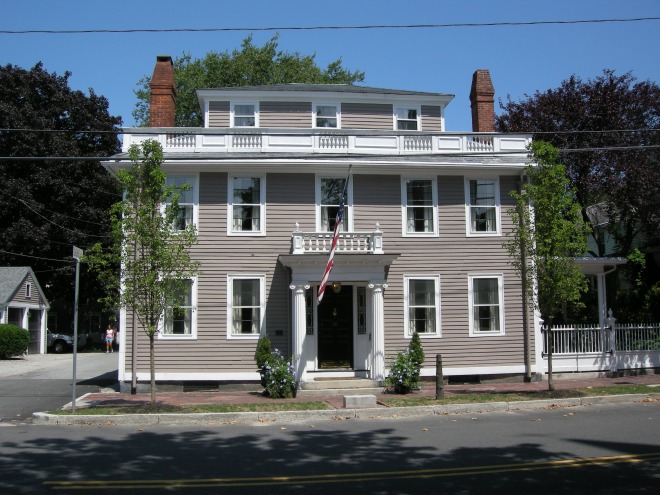 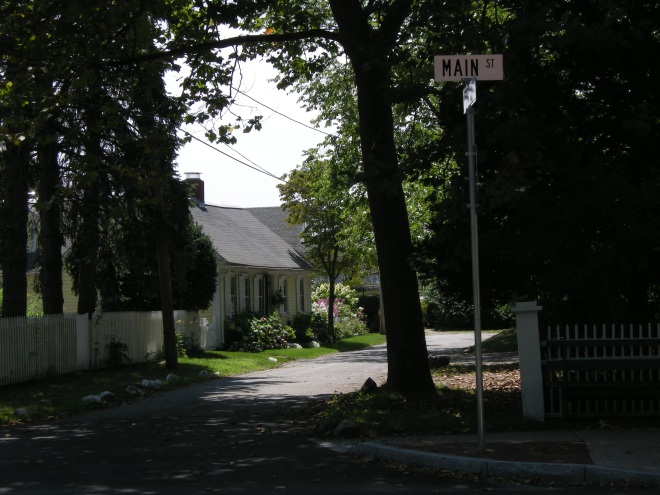 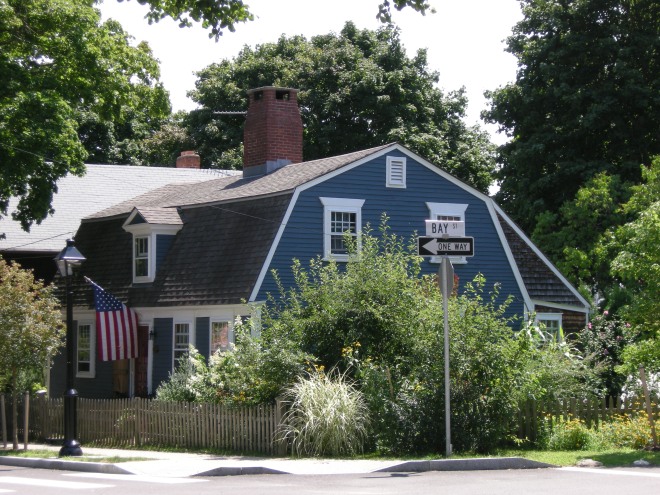 Love the simplicity of this gambrel, and the single dormer 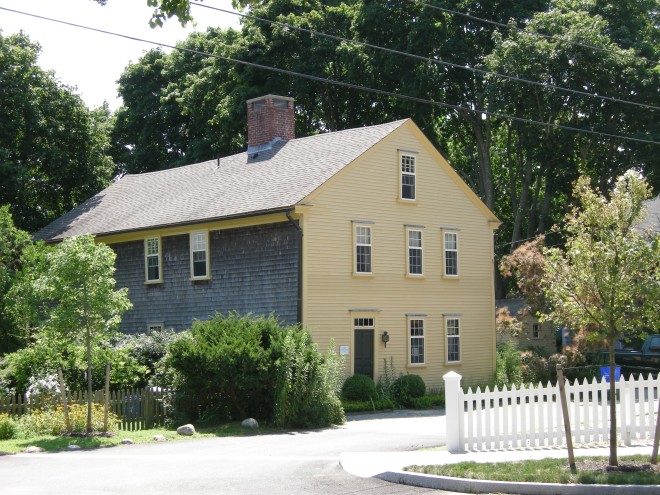 You can feel time's weight on this one, but carrying it well!

End of Main and Harbor 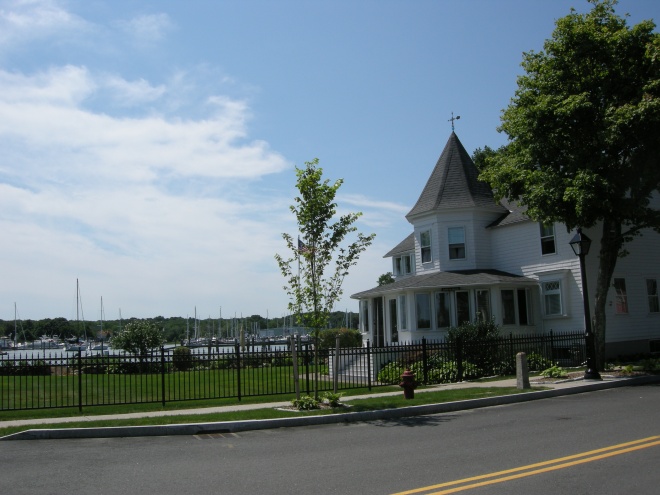 Harbor at end of Main 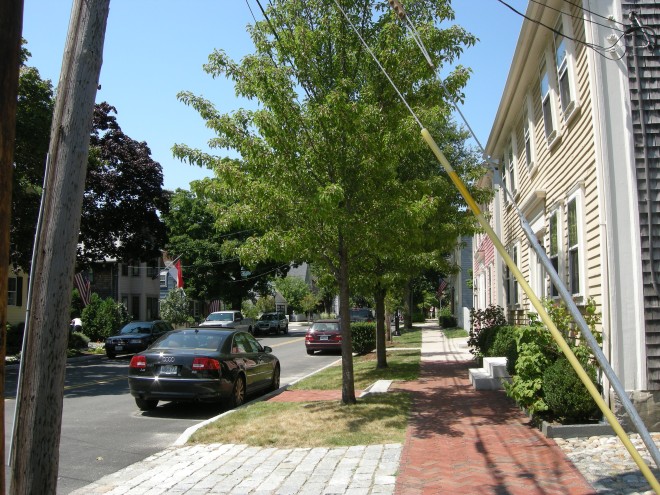 Heading back up Main from harbor 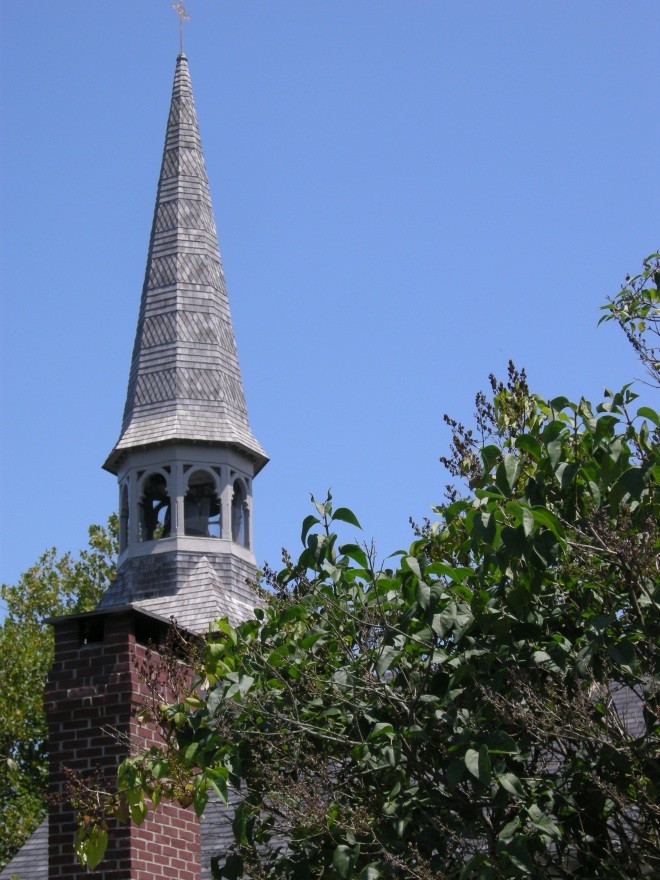 Spire of the "new" St. Paul's from alley

This building on Brown St. is for lease – just how does one get into that doorway???

There are several restaurants with waterside dining – but when it’s hot outside, this little diner on Brown St. has the best “clambake” chowder and clam cakes! 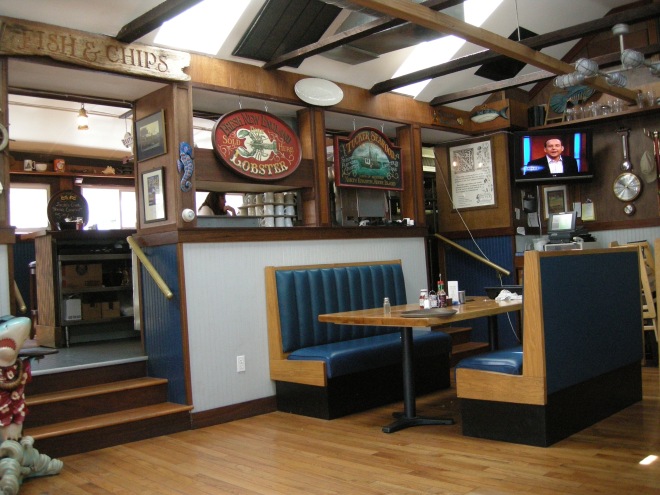 There’s a big surprise on the ride out of town – if you’re visiting at the end of July/beginning of August.  Everyone stops to photograph these giant lilies – but you really have to be there!  They are breathtaking in size and beauty. 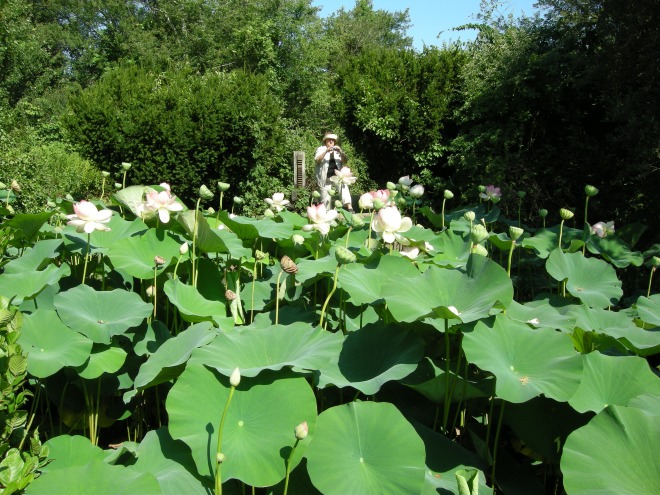 2 thoughts on “The Village of Wickford – A Rhode Island Gem”