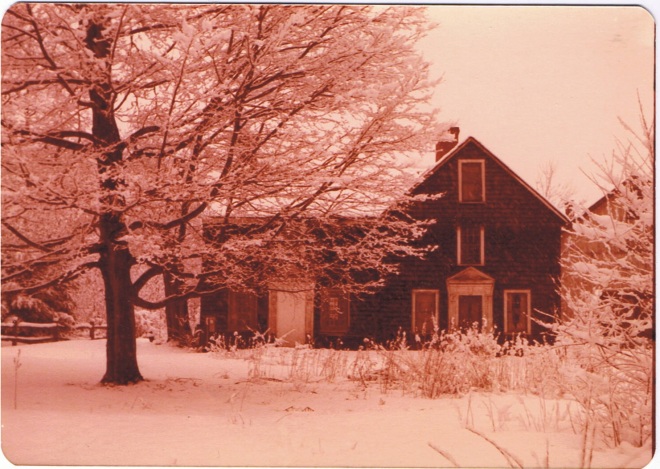 When we first found it, the house was covered with shingles that had weathered a rich, deep, tobacco color.  Unlike houses at the shore, which are almost invariably shingled and turned a silver gray by the salt air, our inland country home in the CT River Valley had weathered the color of its local crop – tobacco.  But shingles were not used inland two hundred years ago.  Oak or pine, sawn into clapboards, would have been the original material of choice.   After visiting the Hempsted house in New London, and falling in love with the siding color and texture, we had a local mill cut rough pine into clapboards for us.  The finished side would face out, by the way, never the rough side.

We then dipped, or soaked, the first batch of shorter lengths in a big barrel of the witches brew we had learned about at the Hempsted house.  We affixed the short, scarfed, clapboards at the back of the lean-to and new bathroom section first.  This ultimately would be the only section on which we used the “brew.”  It would be two years before we got to siding the rest of the house, and by then, the “forbidden” product – creosote – the main ingredient of the “brew” was no longer available.  So, the rest of the house was simply coated with boiled linseed oil, a task we’ve neglected to re-do much over the years.  Somehow, these clapboards have weathered the time and neglect amazingly well, and aged a most beautiful pumpkin, tobacco, and other dark shades of pine in spite of us.  The back side, however, still retains that original charcoal color.

Every clapboard was cut by hand, scarfed one edge over the other, and fastened with a rosehead nail.  I can’t remember where and how we acquired all those nails at the time, they were all antique.  Siding has to be figured and fashioned to fall on a stud in the process, and all of the nails needed to line up, all the way up the house.  Windows and doorways are the exception, but somehow, it works.  There should be symmetry with the line up of the nail pattern, as this will show over the years.  The nails will rust and run and create a line that the eye will see, which only adds character to the unpainted house.

We removed shingles in stages, for the siding process.  When we came to the second floor, we exposed the original insulation – a combination of clay, mud, horse hair, etc. –  called daub. It had apparently been removed over the years in other areas, perhaps when the shingles were installed, but left here, probably for the same reason we would decide to leave it.  It was set in so tightly between the framework, it seemed to be doing its job quite nicely, and the fact that it was original, was another treasure to us.  Why not leave it?  Even though it would be covered over, we would enjoy knowing that that much more of the original house was still in tact.  Another original piece, made right here, from Jacob and Abigail’s earth, even from their horses!  Hmmm…I wonder if their original horse can be cloned using the DNA from some of this hair?  I’ll have to leave that wonder for a few generations next!

One thought on “siding”