Most of us take lots of photos when working on a project, to document the progress, to later compare the before and after.  In the case that you might want to write about it someday, I highly recommend dating them, then storing and organizing them in something other than shoe boxes, bags and drawers.  My photos are as scattered as I am, and my time filled with too many distractions.  Memory serves pretty well, but there’s nothing like turning over that photo and finding the date and situation noted.

Here’s one, of the front of the house, after our two year hiatus.  We had returned from sunny California into a New England blizzard.  But that didn’t stop Edward from setting up outside the front doorway to tend to repairs.  The front hallway of our 1698 house originally had no windows, the side lights were added in the 1800’s.  We removed them, and re-shingled to match the existing siding.  This was a temporary fix, as we would be re-siding the entire house soon with pine clapboards.  This photo shows the windows already replaced with 12/12’s and the chimney rebuilt.  A Yankee carpenter who worked out of a small country lumberyard in the neighboring hills made these for us.  His shop was tiny, but efficient.  The twelve by twenty foot room was lined with benches, hung with tools, and heated with a wood stove.  Wood scrapings and sawdust lined the floor.  A table saw sat in the center, and Fred ruled it all.  He was a woodworker, a blacksmith,  a dowser.  He was one of those Yankees who could fix anything, and if he couldn’t, it probably wasn’t worth fixing.  He was one of those rare gentle men who valued tradition,  and doing things the old fashioned way.  He would visit later, to help us find water – the old fashioned way.

Below are some photos of the fireplaces and chimney restoration/rebuild.  Finding a mason for this was serendipity.  A total stranger stopped by one day who said he was a mason who worked only on old fireplaces and chimneys.  He said he could make it look just like it used to, he had some tricks to make it look old.  And yes, he could build a bee hive oven.  To top it off, of the four family names that had previously owned this old homestead in the last 250 years – his was one of them.  Quite a coincidence.  However, he personally hailed from Maine.  We took a chance, pushed for the details we wanted, maintaining as much of the original integrity as possible.  Most important were tight joints and a hearth that was not mortared in, just laid tight.  We specified the height and width of the chimney as it came through the roof.  We were incredibly fortunate to have photos of the house that were taken in 1888 showing its original exterior features – chimneys, doors, and pedimented 12/12 windows.

There had been a chimney fire at the second floor fifty years earlier when the bachelor homeowner decided to do his Spring cleaning by burning everything he didn’t want, in the fireplace.  There is still charring on the mantel and summer above.  The second floor fireplace had been lost and the larger chimney rebuilt smaller to accommodate the wood stoves.  Also, smaller fireplaces were laid up in front of the larger ones at the first floor.  When we removed the walls to begin the chimney work, we discovered parts of the larger fireplaces still existed, and their side walls still in tact.  In this photo you can see a little cubby that was built into the side wall, the bake oven and smoke ledge.  We were pretty excited. 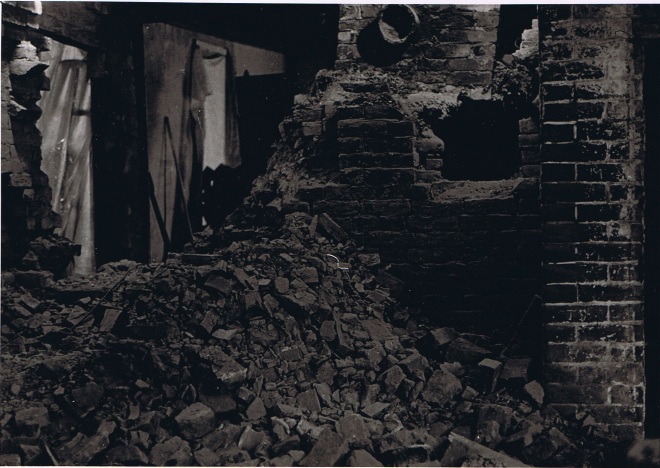 Here, you can see through to the other front room.  It was quite a mess, and quite a task.  It was pretty funny.  Actually, the whole process, messy as it was, was a lot of fun.  The mason, as it turned out, was quite the trickster and our days were filled with stories of his pranks.  We should have been worried that he’d tricked us, but as he worked, we could see that he knew his trade.  Here’s a photo of his building the bake oven.  He filled the ledge with sand and mounded it into beehive shape to form the top of the oven. 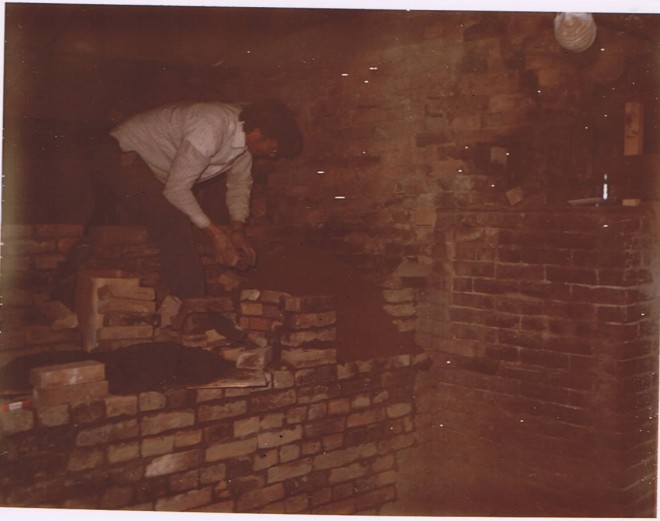 And another, showing what goes on inside the chimney as it goes up. Cinder blocks are used where it doesn’t show, and can be plastered/mortared over. The clay liner is the flue for the furnace, while brick flues are built for the other three fireplaces. Here he is approaching the second floor. I apologize for the quality of these old polaroids. 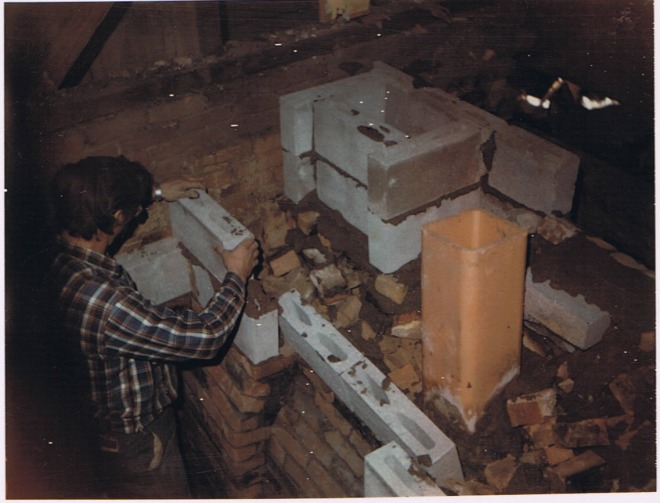 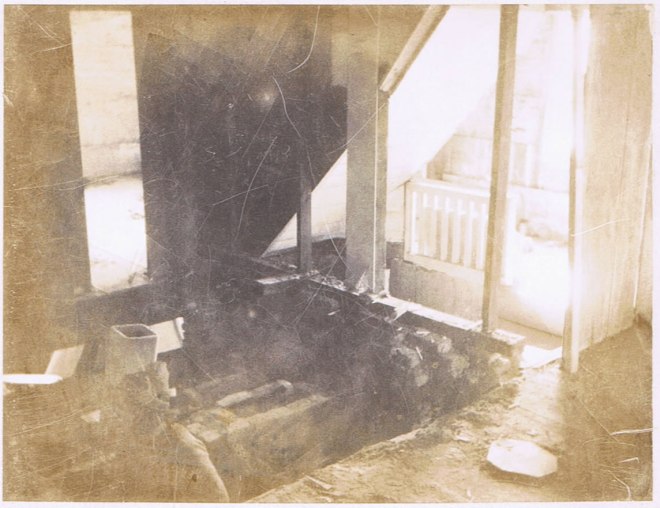 We did find treasures, nothing that would pay for the restoration, but something to excite us through it – that touch with the past that one who loves old houses is always looking for. We knew the house had been built in 1698, the year that Jacob married Abigail. And we knew the names of their children. We knew that the bricks had been made locally, probably right in the yard beside the brook. We found many bricks with writing scratched into them, by the homeowners and their children, probably as they were curing by the brook. Jacob’s name was scratched into one brick, and Abigail’s in another. One was deeply cut into, as though with a finger, with the name “Mindwell,” their daughter. One said “welcome,” another had a paw print, and we found one half of a brick with the number sixteen etched into it, but never the other half. We laid these reminders of whose house this really is, and will always be, into the hearths.