In the “old” days, if you came across a house that looked like it was undergoing restoration, it was not uncommon to stop and knock on the front door – just to tell the homeowner how much you admired their house, appreciated what they were doing, and hoped for a peek inside.  We did that often, occasionally still do, and more than once found ourselves on an impromptu tour of the owner’s “labor of love.”

One day, we had just such a visitor ourselves. They came right up to the front door, gave it a good hard knock – and it tumbled right over into the hallway!  You should have seen the surprise on their faces as we came to the opening where the door used to be.  That heavy two inch thick paneled and battened door, that we had just made, lay cocked diagonally against the staircase wall. They thought they’d broken our door and their apologies were profuse. We assured them no damage was done.  We had just been fitting it in place, and left it for a few minutes while we had lunch. We’ve had many a laugh over that. And they of course, were welcomed in for a tour of our labor of love.

We’ve visited many labors of love over the years.  Most folks enjoy sharing their projects.  The tour usually starts with an apology for the mess – ours included.  One never knows just how accustomed strangers might be to paint scrapings on the walls, wood shavings on the floors, plaster spills and half constructed cabinetry.  Some folks are enchanted as they walk through the history of it all, focusing on original details, asking a myriad of questions, eager to learn about the process.  While some, usually wives, are dragged through by their interested husbands.

We once had a garden tour, the house was open as well, and I remember a woman dragging her husband through, eager to get to the garden.  His eyes were on the ceiling, admiring the massive summer and the hand hewn girts, and anything else he might spy in the split second it took his wife to pull him through the room.  The poor man didn’t have a chance.  Because the route to the garden began at the front door, and through the house, didn’t mean you had to like, or look at, the rooms.  Her eyes were downcast, and she clung to him tightly, as though in fear the beams were about to fall on her.

I find myself entranced in such rooms, soaking in the ambiance, pondering and wanting to touch everything!  Which is why, so long ago upon visiting museum houses, I determined to have my own, one I could touch.  The beams of an old house have an immense presence.  Rather than danger, to me they spell protection.  The old wood has hardened practically to stone, their spans holding up sometimes beyond their expected strength.  The joists, colored from smoke and time, a precious charcoal and chestnut.  And the writing – there was writing on our beams.  The children marked occasions of a ferry ride with their uncle, the ferryman, across the river and into the city.  “I left off weaving novem 6 1735” or “i o u kids 42p” was written across the joists.  The latter expression was a surprise, we didn’t know existed then.  The most poignant was the noting of a father’s loss. 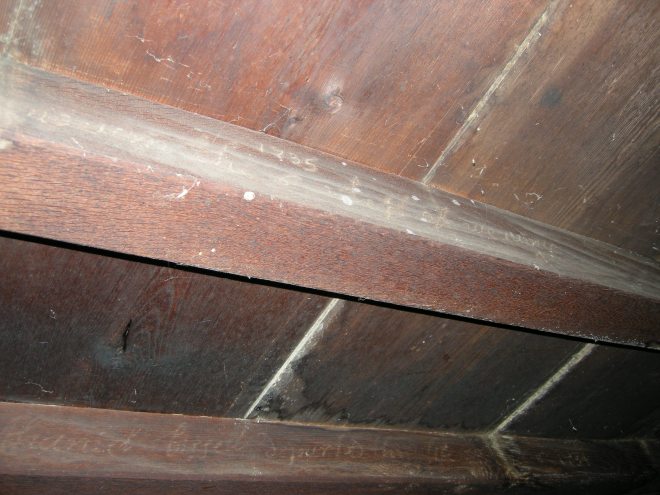 The children loved to write their names….

There is much history to touch, and learn about, in old houses.  The old families interactions with their neighbors, intermarriages, descendants, and all it leads to, is the stuff of books.  Their lives were as full and rich as ours, in spite of what we might call a lack of progress.  I hope to get some of their stories off of the beams and onto paper, one of these days…